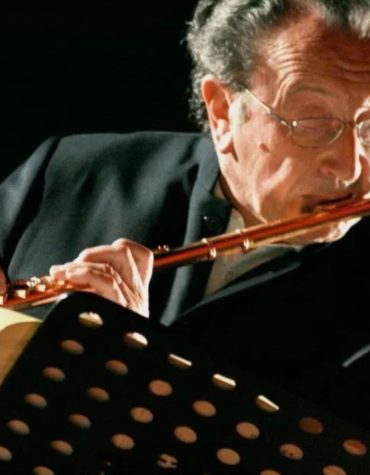 Maxence Larrieu was born in Marseille on October 27th 1934. He’s one of the best representative men of the French flute school. He was taught by Joseph Rampal and belongs to the Rampal’s flute school, with Jean-Pierre Rampal and Alain Marion.

A lot of composers wrote for him :

— Marcel Landowski : creation in Bordeaux of his “concerto” with Jean-François Paillard’s orchestra (1968)

Maxence Larrieu played many times in concert Francis Poulenc’s Sonata with the composer. He also recorded at Grange de Meslay “Aubade”, by Francis Poulenc, with Sviatoslav Richter and the Jean-François Paillard’s chamber orchestra.

— Ballet show on Vivaldi’s music with dancers from Paris’ Opera at the Champs-Elysées’ theater, organized by Henri-Jacques Coudert (1975)

— “Sequenza I”, work of art for solo flautist, creation of a ballet of the Paris’ Opera scene with dancers from Paris’s Opera under the direction of Luciano Berio (1976)

— The “Brandebourgeois Concertos” at Pleyel Paris auditorium, with Zagreb’s and Henryk Szernyng’s soloists, under the direction of Antonio Janigro (1980)

He played with the best orchestras of the world (I Musici, English Chamber Orchestra, The Zagreb’s soloists…) and especially with Jean-François Paillard’s Chamber Orchestra, with who he gave more than five hundred concerts, and recorded about thirty times.

He recorded about a hundred records, more particularly with orchestras from Prague, Munich, Cologne, Monte Carlo, I Musici, “l’Ensemble Instrumental” of France, Orchestra of Sarre, Philharmonic of Turin, and had fifteen “records big prizes”.

Since 1964, he’s also regularly invited to Japan, Corea, China, USA and all over Europe for master classes (Juilliard school, Yale, Royal Academy of London, Milan, Nice…) and concerts. Maxence Larrieu was a member of the jury for different competitions: Kobé, Carl Nielsen, Munich, Prague and Budapest. He was president of the Jean-Pierre Rampal’s competition in 2001.

He’s now the artistic leader of the season of concerts at the abbey of “San Futtuoso di Camogli Ligurie”, which takes place in July and August every year since 1993.