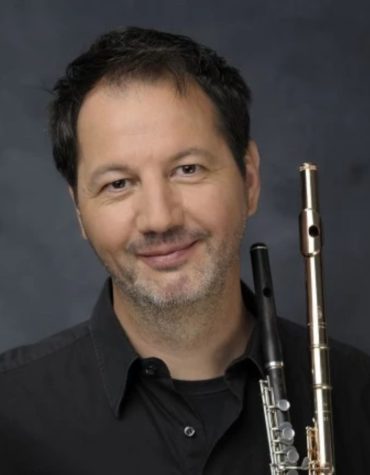 As a guest he played in the Berlin philharmonic with the conductors Claudio Abbado, Maris Jansons and Bernard Haitink Sir Simon Rattle, Daniel Barenboim and Zuin Mehta.
Since 2002 he is a member of the Richard Wagner Festivalorchestra in Bayreuth .

As a soloist he has been a guest in CD and radio productions and he has toured through Germany , France , the USA , Estland, Japan and Switzerland . In December 2006 he was invited as soloflutist with the “Symphonica Toscanini Foundation Orchestra” from Lorin Maazel.

Jürgen Franz played with colleges like Sir James Galway, Maxence Larrieu and Davide Formisano and he is a frequently guest at the flute festivals all over europe. At music-festivals he plays all sorts of solo and chamber music literature, mostly with piano, guitar, organ, strings and orchestra.

As a teacher Jürgen Franz is professor at the Musikhochschule Hamburg and at the Hamburg Conservatory. He also gives international masterclasses in USA , Japan, Brasil and China.

Jürgen Franz is a Ha ynes Artist and plays an all 19,5kt goldflute from Wm.S. Haynes.